a. Ukraine, Russia, Turkey, and the United Nations (UN) have signed an agreement on the shipment of grains and fertilizer from some Ukrainian ports, commonly referred to as the Black Sea Grain Initiative (the “initiative”). The initiative is currently being implemented under the supervision of a Joint Coordination Centre (JCC) in Istanbul, comprising of representatives from Ukraine, Russia, Turkey, and the UN.

b. Ukrainian ports of Chornomorsk, Odessa, and Pivdennyi (ex.Yuzhny) have been opened for use by the initiative, and a Maritime Humanitarian Corridor has been established for safe passage of merchant ships through the restricted zone.

c. The JCC issued detailed procedural guidance for the export of goods from Ukraine.

d. All exports and vessel traffic through the Maritime Humanitarian Corridor must be authorized and monitored by the JCC. Inspection of ships using the initiative is conducted at anchorage off Istanbul by the JCC.

e. Multiple vessels have used the initiative since 1 August 2022. Vessel movement to and from Ukrainian ports can be monitored on a dedicated UN webpage.

f. The frontlines are still close to major port cities of Nikolaev and Kherson, controlled by Ukraine and Russia respectively, with shelling of Nikolaev occurring regularly.

g. The Sea of Azov remains closed for navigation, although some vessels are allowed by Russian authorities to transit the area.

h. According to Russian officials, the occupied Ukrainian ports of Berdyansk and Mariupol are open and operating. However, traffic is very limited.

i. The Danube River ports of Izmail, Reni and Ust-Dunaisk are operating and handling ship calls via the river and the Sulina Canal.

3. IMO Emergency Task Force: In response to the ongoing conflict between the Russian Federation and Ukraine, the IMO established an Emergency Task Force (ETF) to coordinate the mitigation of security and safety risks to shipping in the Black Sea and Sea of Azov. As a result, the IMO Secretariat now maintains a dedicated page on the IMO website for the provision of current information and guidance to the international shipping community.

a) Setting of Ship Security Level III (or equivalent security measures) for all RMI flagged vessels operating in the exclusive economic zone (EEZ) of Ukraine.

b) Setting of SHIP SECURITY LEVEL II (or equivalent security measures) for RMI flagged vessels in the Black Sea EEZ of Russia. Commercial vessels should not attempt to enter the Sea of Azov or the Northwest Black Sea north of 45° 21’ since access will be denied by Russian military forces. This setting is subject to change as the dynamic situation progresses.

c) Ships intending to call at a port/port facility in the areas depicted below must ensure that security measures equivalent to Ship Security Level II or III are implemented as per the Ship Security Plan. If cargo operations at Russian ports in the Black Sea are necessary, a Declaration of Security should first be carried out with the Port Facility Security Officer (PFSO). 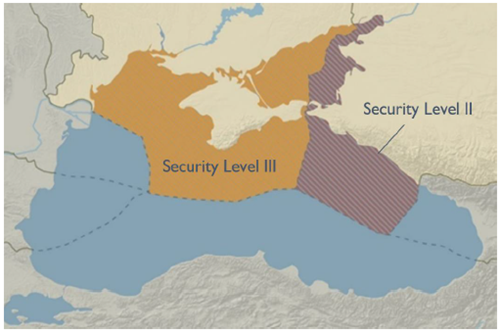 d) Ships currently located at Ukrainian ports must remain in place until permission to depart is granted by the Ukrainian military. Security measures equivalent to Security Level III must be implemented while held at port. Lights should be switched off at night or kept to a bare minimum. Masters should assess whether to switch AIS off due to imminent security threat while stuck alongside or within Ukrainian port limits. This may help mitigate the risk of unintentional GPS-guided targeting by military forces.

5. Further, the Administration has provided following guidance/ information for owners/ managers and masters of RMI flagged vessels in this regard:

a) Commercial vessels are advised to avoid any transit or operation within the EEZ of Ukraine or Russia within the Black Sea. Access to the Sea of Azov through the Kerch Strait is currently blocked by Russian forces.

b) All Ukrainian ports have been closed by the Ukrainian military. Commercial ships may not enter or leave port at this time.

c) Access to the northwest Black Sea is restricted by the Russian Navy. Transit in this area should not be attempted.

d) Commercial operations within the EEZ of Turkey, Bulgaria, Georgia and Romania are currently unaffected by the conflict.

e) Vessels should ensure the automatic identification system (AIS) is always transmitting (except when the master believes that continuing to operate AIS might compromise the safety or security of the ship or when a security incident is imminent), consistent with provisions of the International Convention for the Safety of Life at Sea (SOLAS), and monitor VHF.

f) Any vessels hailed by military vessels should comply fully with instructions.

g) Armed security personnel are not to be embarked while operating in the Black Sea.

6. In the event of any incident or suspicious activity, RMI-flagged vessels should immediately notify the Administrator, the NATO Shipping Center (NSC) and activate the Ship Security Alert System.

7. Suspected or confirmed cyber or electronic interference incidents must be reported to the Administrator and the NSC.

8. Owners/ managers and masters of RMI flagged vessels are advised to take note of the above requirements and ensure compliance.

This Technical Circular and the material contained in it is provided only for the purpose of supplying current information to the reader and not as an advice to be relied upon by any person. While we have taken utmost care to be as factual as possible, readers/ users are advised to verify the exact text and content of the Regulation from the original source/ issuing Authority.